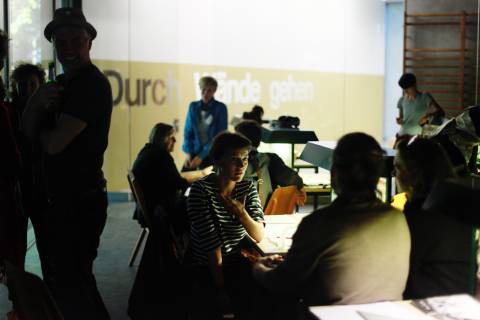 Travesty for Advanced Performers, a threepart exhibition series, was devised within the context of inclusion/exclusion on both a European and International level, including discussions on immigration debates and violence against women, migrants and homosexuals. It investigates (hetero-)normative forms of action and considerations on the subject of majorities and minorities, with the aim of introducing a new dynamic to set patterns of social thought. The relation between subject, power and gender is viewed from different angles.

A combination of exhibition space and stage will be set up in the new building of the GfZK, designed to accommodate individual presentations, dance performances, lectures and workshops. Works of art will be presented for varying lengths of time and in changing constellations, and accompanying events will be carried out to provide new perspectives.

Travesty for Advanced Performers reflects on the workings of the art institution compared to social and mainstream media. Which pieces of information are opinion-forming, at what frequency and in which way do they reach people, in what form are they processed? Can the institution open up and slip into the role of the individuals for whom changes and multiple identities produce a sense of insecurity, fear and resentment? Is it possible to step outside of the “protected area” of art and confront these obstacles?