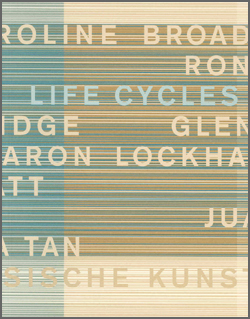 Throughout history different cultures have divided the cycle of an average human life into a number of stages, each typified by a set of distinguishing characteristics and related behaviours. While some cultures have focused on a rudimentary three-part-cycle – youth, maturity and old age – many have made more subtle and sophisticated distinctions.
This exhibition will take as its point of departure the conceit of seven stages of life, which is arguably the most familiar: infancy, childhood, youth, adolescence, adulthood, middle-age and old-age. Works by contemporary artists dealing with these subjects, as states of mind and as a metaphors of desire, rather than from a sociological or ideological position will constitute the point of departure.

The Galerie has a suite of seven galleries which will present the core of the exhibition, comprising work by such artists as Roni Horn (USA), William Kentridge (South Africa), Juan Munoz (Spain), Sharon Lockhardt (USA), Tracey Moffatt (Australia), Arturo Herrera (Venezuela), Glenn Ligon (USA) and Fiona Tan (Indonesia). Their work ranges across a variety of media, from photography to walldrawings and collages, photoalbums, animated film, drawing, sculpture and video. In addition, in the balcony leading into the exhibition, a group of mirror-based works by Canadian artist Ken Lum will be presente as a means to engage the viewer directly in a self-reflexive meditation on this subject, a subject of deep personal concern to everyone. On leaving, the visitor will see high in the rafters of the stairwell, an animated “crystal” skull by American artist Tony Oursler, a wry meditation on mortality.

By juxtaposing works of very different kinds by artists from a variety of generations and cultural heritages, this exhibition attempts to focus on the universality at the heart of such concepts, and the ways in which desire and fantasy as much as biology, genetics or the media shape our contemporary understanding of this time honoured notion of the life cycle.
Ultimately, such notions are inventions born of collective societal needs rather than either eternal constants or the products of a deterministic human evolution. Certain of these current models may prove deeply problematic, constraining and delimiting. Others, by contrast, offer enormous potential for self-fashioning, for they are based in a notion of the individual as a tabula rasa to be invented through the operations of fantasy and willpower. The challenging compass of vanguard works that comprise this exhibition probe and critique these timely issues.